Observation of celestial bodies and depictions of cosmic maps and star atlases are frequent motifs in the work of the artist Patricia Dauder. For this year’s Nadala, Dauder presents Alineacions (Alignments), an installation centred around the Christmas Star as an astrological and symbolic phenomenon.

The Gospel According to Saint Matthew relates how three wise men from the east, probably astronomers, saw a star appear in the west, which was to guide them on their journey to the place where the King of the Jews had been born. According to Christian tradition, the Star of Bethlehem or Christmas Star is a sign of the miracle of the coming of the Messiah. According to Patricia Dauder’s research for this piece, “thousands of astronomy studies over the centuries have sought to provide a physical explanation for this Christmas symbol, which in all probability was a genuine astral phenomenon. Various hypotheses have been put forward; one of the most popular theories points to an unusual combination of astronomical events including the triple conjunction of Jupiter and Saturn”.

Alineacions is a composition created from various painted panels of fabric, in which the global image is produced by superimposing all the panels. Dauder speculates about what people must have observed in the sky at some point between the years 7 and 2 BC. Far from producing an illustration based on the possible hypotheses, she creates a totally free image that alludes to the optical effects of the conjunction of the light and the alignment of astral orbits. 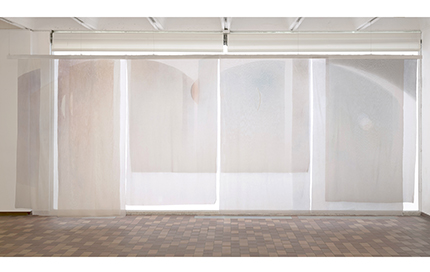 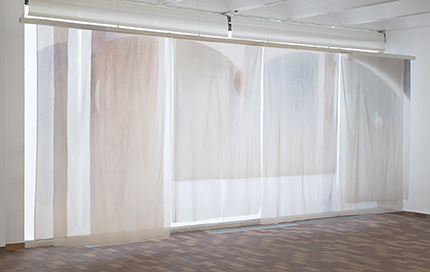